Click the video below to watch the first week’s videos!

DAVISON (DTV) – (11/16/2020) – Davison Schools’ Superintendent Kevin Brown gives an important update following Governor Whitmer’s decision to enter a statewide shut down once again and what it means for Davison.

Watch the video below

First, although, you must fill out the reservation form here.

Virtual students can pick up the order form just outside the main office.

These forms must be given to the main office once filled out.

You can also order the form on the Jostens website.

Also, senior headshots are due on the 23rd of November. You can send them by emailing them to the yearbook team at this email: dhsyearbookteam@gmail.com

DAVISON (DTV) – (10/22/2020) – Cool to Care is ramping up again this year in Davison. Donations of non-perishable food items and hygiene products are being accepted at Davison Schools through December 8th.

This year because of Covid-19, a new way to donate has been added. You can now donate money through the e-funds website. Just click here. For every 2 cans or every $1 donated, the students name will go into a drawing to win a gift card.

All items and money donated go to Outreach East right here in Davison.

DAVISON(DTV) – (10/13/20) – Davison’s Athletic Director, Dave Beamer, is helping to raise money and awareness for breast cancer during the month of October.

As part of the “Real Men Wear Pink” campaign, Mr. Beamer has set a goal to raise $2500 for the American Cancer Society. As of Tuesday October 13th he was in the number 3 spot for Mid-Michigan candidates.

On Dave’s “Real Men Wear Pink” page, he says, “Breast cancer affects everyone – it doesn’t matter if you’re a man or a woman. That’s why I’m stepping up to fight breast cancer with all I have. Since I’m in a position to make a difference within my community, I believe I have an obligation to do so. By raising money and awareness through Real Men Wear Pink, I’m helping to save more lives from breast cancer.”

DAVISON(DTV) – (10/12/20) – Friday’s homecoming was definitely unlike any other we’ve had in the decades long tradition. It’s been difficult at times to keep up with the constant changing of rules and regulations because of Covid-19. This year staff and students have faced many new challenges and disappointments and homecoming was no different.

Up until the week before homecoming, Davison wasn’t sure if it could make a “homecoming” happen. But thankfully due to new recommendations and regulations, Davison Community Schools was able to pull together a smaller scale of celebrations. This included a parade with only immediate members of the high school homecoming festivities including the homecoming court, the football team, cheer, pom, dance, and the DHS marching band. Each school in Davison also participated in spirit week.

But the Wednesday before homecoming, another disappointment hit Davison Community Schools, the center staple of homecoming, the football game, had to be cancelled after the opposing team, Saginaw Heritage, had to be quarantined after an exposure to Covid-19. While Athletic Director Dave Beamer worked extremely hard to find another team to come play Davison, he was unable to find anyone.

Despite having no homecoming game, the celebrations continued starting with the parade. Participants of the parade marched right in to Cardinal Stadium to start what would have been the pre-show and halftime performances. The celebration kicked off with recognizing senior members of the football, cheer, pom, dance and marching band. The pom and dance teams both performed as well as the DHS marching band.

In between performances Brendan Sullivan was crowned the 2020 Homecoming King and Mallory Morton was crowned Queen. Parker Arnold was voted Mr. Congeniality and Regan Snyder was chosen as Miss Congeniality. 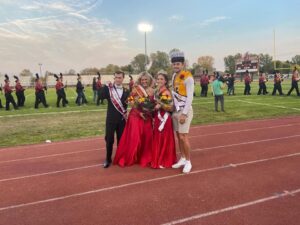 While the night wasn’t like past homecoming years, most students, staff and community members were happy to have some form of celebration. If you missed the parade or the “halftime” show, we have them posted on our YouTube page. Just click the links below!

Athletic Director Dave Beamer is trying to find an opponent to compete with, but there is no luck so far.

However, the annual Homecoming Parade is still a-go! The parade will start at 5 pm on Friday and the marching band, dance, cheer and pom teams, football players, freshmen, sophomore and junior class representatives, and homecoming court will be there!

One change to note is that the path is completely reverse of the original:

Ron Jacobs made some more important items to note:

DTV will be streaming the parade LIVE as well as the halftime performances and celebrations. Watch on our YouTube page or on Charter channel 191.

To watch last year’s parade, click on the video below!

In order to stay up-to-date on information and opportunities for student’s classes, make sure to join the counseling classroom according to graduation year. 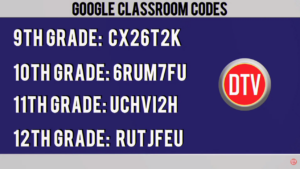 DAVISON (DTV) – (10/01/2020) – In October, Davison is celebrating College and Career Month. Seniors should be preparing and sending out college applications in October.

If you’re needing a little extra help financially for college, there will be a virtual FAFSA night on Thursday October 8th. The meeting will be done through zoom for parents of seniors and will take place from 7 until 8 p.m.

During the meeting you will learn about the FAFSA process and how you could qualify for scholarships, grants, and loans for college.

Please click the link below by Thursday, October 8, to sign up for this important virtual meeting about the Free Application for Federal Student Aid (FAFSA). Don’t let this opportunity slip by!
https://docs.google.com/forms/d/e/1FAIpQLScPCWgBJdrMxyroUELQGytf2YqAvffLPry-JniBRKCZVJ1qEw/viewform

Check out our social media