The students will learn a routine and be able to perform during halftime at a boys varsity basketball home game on February 7th. The deadline to register is Friday January 13th.
The cost is $30 per participant which includes the instruction, poms, and a t-shirt.

If you have any questions or would like to register, email coach Melissa Simpson at msimpson@davisonschools.org.

You can register by clicking on this link: https://forms.gle/g94VCeasNARm26RZ8 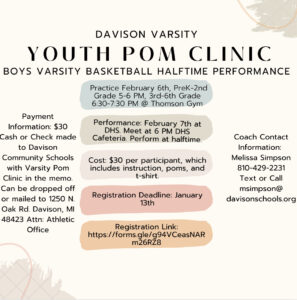 DAVISON (DTV) – (11/22/22) – High School hockey season has started and this year, tradition has changed. Players from Flushing, Swartz Creek, Goodrich, and Davison hockey teams have partnered up and are now called the Genesee County Generals. A nod of course to the Flint Generals back in the day. Check out the full story below!

Winter sports are wrapping up and with that comes the spring season. Season tryout will all begin on March 12th here is a list of all the tryout times and where to meet.

Track and Field @ 3 till 5  in the DHS Cafeteria

Girls Tennis @ 3 till 5  on the Tennis courts

Girls soccer @ 7 till 9:30 at Genesee Field-house (Bus departs at 6:20 from West athletic entrance)

Boys golf at a still to be determined time in Ms. Stockers room. 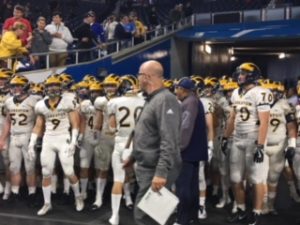 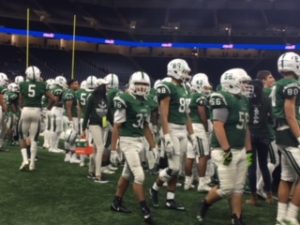 During a Press Conference this morning at Virginia Tech, Mark Edwards, the lead scientist in the Flint water investigations announced that after 5 rounds of testing on the water of Flint, the levels have dramatically changed and have found themselves slightly below normal. They will continue to conduct tests on the water to make sure that it stays below normal levels and does not fluctuate, but for now, scientifically the crisis is over. The people of Flint have reason to be in doubt and Mark Edwards himself even believes it will be awhile before trust is restored between the people of Flint and their government but there is no denying that the trust has been depleted and the damage cannot be undone. DTV has been with the Crisis and we will still be as the entire thing unfolds.