DAVISON (DTV) – (11/18/22) – DTV has won another huge national award! The National Academy of Television Arts and Sciences awarded DTV the Student Production Award for Best Sports Coverage in the nation! This is the equivalent of an Emmy for students. The award was given for our coverage of the Davison vs Lapeer Football game on October 22, 2021. It was handed out by ESPN’s Malika Andrews with a special appearance by NBA player Cam Johnson from the Phoenix Suns.

The National Academy of Television Arts & Sciences was founded in 1955. It is dedicated to the advancement of the arts and sciences of television and the promotion of creative leadership for artistic, educational and technical achievements within the television industry. It recognizes excellence in television with the coveted Emmy® Award.

DTV is extremely grateful to Davison Community Schools, Mr. Beamer, the Cardinals Football team, and the entire Davison community and beyond for their continued support! Without all of you, we wouldn’t be who we are! Thank you for tuning in to our live events throughout the year!

Click HERE for the video of NATAS announcing our big win!

DTV was also awarded 5th place in the nation for our story “Heartbreak on and off the lanes” on the girls bowling team last year, and our newscast was a finalist for the Pacemaker award hosted by the National Scholastic Press Association.

DTV (DAVISON) – (09/29/2022)  -Hurricane Ian hit the southwest coast of Florida on Wednesday as a category 4 hurricane with wind speeds reaching up to 150 mph. The hurricane then continued on to the east side of Florida through Thursday. It is projected to hit the water again between now and tomorrow morning. By then Ian will have lost some strength turning into a tropical storm but once it hits the water it may gain some of its strength back. It will then head towards Charleston, South Carolina.

A close friend of DTV, Margaret Grigsby of Fox13 in Tamp Bay reports her experience as they bunkered down at the news station and prepared for the storm to hit. Click HERE to see Grigsby’s report and to watch DTV’s newscast from today with special Hurricane Ian coverage.

DAVISON (DTV) – (2/10/2022) – In honor of tomorrow’s basketball doubleheader against Grand Blanc, we take this week’s throwback Thursday back to 2005.

In the first Grand Blanc Davison lost on a double-overtime heart-breaking buzzer-beater at home, but several weeks later Davison would get revenge with a 3 point victory on the road at Grand Blanc. Below, is the highlights from the Davison win in Bobcat territory.

2005 was an epic year for DHS basketball and now you can go back and watch these games plus all the highlights on the DTV youtube page. Just search playlists for boys basketball, or you can search by topic or year. It’s never been easier to find your high school memories on DTV.

DAVISON (DTV) – 1/25/22 – Local scholarships are available and ready for students to apply for!

These scholarships are awarded on Senior Honors Night later in the year!

The SET SEG Foundation’s 2022 Skilled Trade Scholarship application is also now available. Michigan public high school seniors who are enrolled or plan to enroll in an accredited two-year college, technical school or other accredited technical institute within the next 12 months are eligible to apply for this scholarship.

If you have any questions regarding the application process or the scholarship, please contact setsegfoundation@setseg.org or call at (800) 292-5421.

Both teams coming off a win, should make for a competitive game tonight. The Davison girls played Notre Dame Prep last Thursday and won by a landslide, with the score of 61-14. Last week, Bay City Western also took home a big win playing against Lapeer. The Cardinals and Wolves girls basketball teams both have the same record of 3-5 and are both looking to put another win in the books.

To watch the game, tickets can be bought at the door for $5.00 or you can watch highlights on our YouTube channel DTV News.

DAVISON (DTV) – (1/07/2022) – Now is your chance to commemorate a senior’s achievements and milestones. You can buy a senior recognition ad in the Davison High School yearbook. To create your own ad click here, Once you are on the website choose your ad size and layout, then add your text and upload your photos

Lunches are as follows:

LANSING (DTV) – (1/06/2022) – Governor Gretchen Whitmer is challenging Michigan’s K through 12 students to come up with a creative and unique design for the 2022 State of the State program cover. The theme for the contest is “Why do you believe in Michigan?” Students should be as creative as possible and are welcome to use crayons, markers, paint, or any other material.

During her State of the State address, Governor Whitmer plans to share her vision for Michigan, and plans to address key issues in Michigan, including jobs, education, infrastructure, and the economic future of Michigan.

You can submit your design here. Follow instructions on the webpage. All submissions must be submitted online, no later than 11:59pm on Sunday, January 16th. 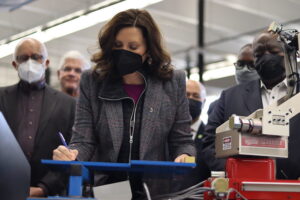