DAVISON (DTV) – (5/26/2022) – Davison may have a new sports team coming, but it’s not on the field. Instead their games will be held online. If you’re curious about what Esports is, it stands for electronic sports, as in multiplayer video games played at a competitive level! If this sounds interesting to you, you can sign up for the ESports team by filling out the google form with the QR code below! 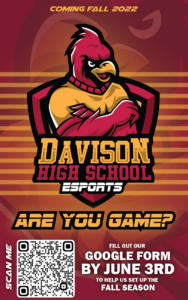 DAVISON (DTV) – (07/30/2020) – ALL Davison School’s principals are featured in DTV’s latest video! In this special near-7 minute video, principals give their students a warm welcome back during peculiar times. Watch the video below to find out some tips and tricks for the next school year as well as some information!

Teachers will be sending emails to students regarding weekly agendas, technology will be handed out to students and more in this edition of Brown’s Blog.

Updates on this plan will be posted on the Davison Community Schools website and on social media!

DAVISON (DTV) – (12/11/2019) – DTV has released their newest documentary, “Great Lakes: On the Brink”. The class traveled 2,468 miles over the past few months getting video, interviewing professionals and specialists, and researching the problems surrounding the Great Lakes.

The Great Lakes make up 21 % of the fresh-water on Earth , that’s 3% of our world’s water supply. This means the Midwest is sitting on top of one of the largest sources of life.

In this special, the team dives deeper into the many challenges the lakes are facing this very moment and what it means for our communities. Invasive species, rising water levels, and the controversial line 5 are just a few of the topics DTV tackles.

You can find more information regarding the special at this link.

DAVISON (DTV) – (06/11/2019) – Everyday millions of people are on their phones. Most of them aren’t paying any attention to their surroundings. They run into people and a lot of times they don’t acknowledge their friends or family. We often get too caught up with what’s in our phones, rather then what’s going on around us. Watch this short PSA to see reasons why our phones should be down and our heads need to be up!

The competition brings teams from all over Michigan. It takes place in Fint at Kettering University.

Admission to Kettering’s FIRST Robotics event is free and open to the public. The competition runs on both Friday March 9, and Saturday March 10.

Team 3534, House of Cards, along with two other area robotic teams appeared on ABC12 This Morning on Wednesday March 7.

Periscope is changing the way we think about mobile video. In the mobile phone world, YouTube and well… YouTube is the most dominant video player and up-loader available. It was essentially the only video sharing service on iPhones until Snapchat came along. However even on Snapchat, users are only surrounded by other selected users. The audience doesn’t grow wider than that. Eventually, Vimeo released it’s mobile platform,  but Vimeo’s policy only allows for professional videos and films, not everyday user content.  In terms of livestreaming, there’s Twitch, Livestream.com, Ustream, and YouNow. While some of these sites did offer a way to communicate/stream and use the apps on smartphones, they just didn’t have the name power or the marketing. Not to mention the apps were shaky – sometimes they worked, sometimes not so much.

Why is it better than the rest? It’s connected with Twitter, the biggest social network in America, apart from Facebook and YouTube. The sign up is as easy as writing an email. You click a few buttons and you’re in. Not only that but the platform itself works. It doesn’t crash, it doesn’t become unstable. It just works, and that doesn’t always happen with streaming and video apps as they’re known to be buggy.

The idea was conceived during Pakistan protests in 2013 when one of the founders, Kayvon Beykpour was there when the protests broke out. He wasn’t near the situation, but was obsessively checking Twitter and constantly reading about the protests. After browsing for moments on end, it bothered him he couldn’t truly see what was happening live through the eyes of someone on the scene.1http://www.businessinsider.com/what-is-periscope-and-why-twitter-bought-it-2015-3

Developed in February 2014 as “Bounty”, Periscope was funded nearly $1.5 million in its early stages.2https://www.producthunt.com/live/kayvon-beykpour Next January rolled around, and less than a year after its start and funding, Periscope was bought by Twitter. The potential was that strong.

Ever since then the app has had a meteoric rise. According to them, they surpassed 10 millions Periscope accounts in August and is continuously growing. Not only do they have a big following, but nearly “40 years of video is watched per day”.3https://medium.com/@periscope/periscope-by-the-numbers-6b23dc6a1704#.7singfz4g

In short, it’s going to be a big thing for a long time. Here’s how to use it: 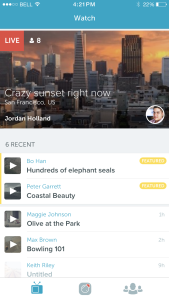 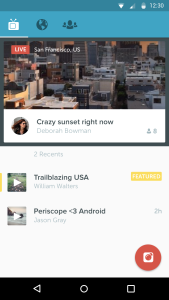 This the first screen you’ll see after you log in to the app. From here you can see whoever is broadcasting on the app all across the world. The first time I used it I think I was watching a stream of  downtown NYC and then I switched over to a person in Argentina hiking. It’s a crazy experience. 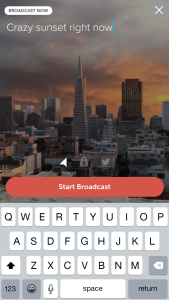 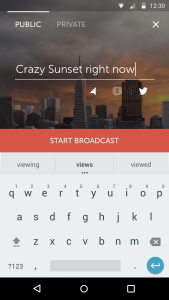 The main part of this app is the broadcast tool. You select the camera tab and it will you take you to this screen which will be showing what your front or back camera is pointing at. 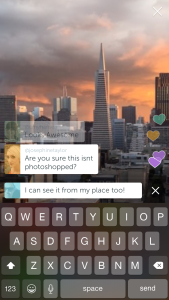 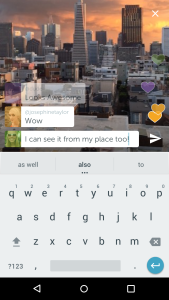 From the audience’s point of view, there is a chat tool which lets the broadcaster and audience communicate.

It’s a simple app, but what it enables its users to do is very powerful and full of potential. It’s already been used in breaking news events, across the globe. While the event was horrific, the app was heavily used during the Paris terrorist attacks by journalists, reporters, and everyday people in the aftermath of what happened. People worldwide, myself included, felt the emotion and chaos on that day through an app on a phone.

With seemingly every app, controversy follows, and Periscope has its issues. People have argued it can be used for inappropriate reasons and can be too surreal. Periscope has showcased a strong force against content not following their policies and it hasn’t grown to be an issue since its birth as an app. The surreal part – that’s up for users to decide.

Either way, Periscope has broken onto the scene in a very short time period and has transformed the way experiences are shared. It will only keep going up from here.

Make sure to follow DTV on Periscope @DTV_Official to watch behind the scenes content, live events, and more!