DAVISON (DTV) – (3/2/2022) – Keasley and Lapeer kicked off the first girls basketball district game on Monday! Check out the details of the game and stay tuned as DTV will be covering all of the district games for the rest of this week and next week! Welcome to District Mania!

Parent meeting for girls is at 6 pm. The boys’ parent meeting is at 7 pm. Both are in the Davison high school auditorium.

Bring a water bottle and wear proper attire, but no experience is required to try out for the teams.

DAVISON (DTV) – (3/1/2022) – Davison is hosting the SVL Basketball districts for both boys and girls. DTV’s District Mania will cover all of these games with highlights, packages, and more! A full list of them can be found below! 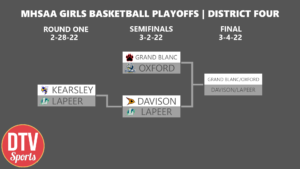 Last Saturday, the boys wrestling team took on their arch rivals, Detroit Catholic Central, in the state championship hosted at the Wings Event Center in Kalamazoo. The meet came down to the wire but Davison held the lead the whole time. Davison came out with a monumental victory, defeating DCC 29-21. The team has earned the state championship title against Detroit Catholic Central for the second consecutive year. The entire Davison community is very proud of the wrestling team and their accomplishments.

DAVISON (DTV) – (2/10/2022) – In honor of tomorrow’s basketball doubleheader against Grand Blanc, we take this week’s throwback Thursday back to 2005.

In the first Grand Blanc Davison lost on a double-overtime heart-breaking buzzer-beater at home, but several weeks later Davison would get revenge with a 3 point victory on the road at Grand Blanc. Below, is the highlights from the Davison win in Bobcat territory.

2005 was an epic year for DHS basketball and now you can go back and watch these games plus all the highlights on the DTV youtube page. Just search playlists for boys basketball, or you can search by topic or year. It’s never been easier to find your high school memories on DTV.

DAVISON (DTV) – (2/8/22) – After a surprise 5-day break packed with snow, Davison athletes are right back at it this week. Let’s dive into another week of cardinal sports – hopefully without the side of the fluffy white stuff like last week.

The lone competitor on the first day back is the hockey squad, looking to find some momentum in their season after a massive 8-0 win against Manistee last week. The guys are hosting Tawas for a 5 pm faceoff time.

The first of two SVL doubleheaders is against a Powers squad that always gives the Cards a good game. The girls will tip off at 6 pm while the guys will follow at 7:30 tentatively.

Last year the girls blew the lady chargers out of the water in a 60-34 season-opening win, while the guys were on the losing end of their matchup in an 11 point loss.

The wrestling season is already heading into playoff season, hosting the MHSAA districts meet here at DHS with the time TBA.

The hockey squad is out for their second of three games this week, taking a road trip to Midland for a 7 pm faceoff with the Chemics.

The second basketball doubleheader of the week starts with a 6 pm matchup between the Lady Cards and an accomplished Grand Blanc squad. The Lady Bobcats are heading into this one with a solid 8-4 record, with mixed results last week after a loss to Midland Down and a blowout win at Lapeer. Meanwhile, the Lady Cards are sitting at 6-7 as of Monday, with a similar-looking week last week ending in a win and a loss in the books.

The guys are looking to avenge their playoff loss last season to the reigning state champs. The story is a bit different this time around, with some big holes left by departures being filled for the Bobcats this past offseason. They’ve managed an 8-4 record with plenty of tough opponents lined up so far, riding a 6 game win streak into this week. The Cardinals are looking to bounce back from a 2 game losing streak, with only a handful of games to get their 4-8 record towards the .500 mark. They’ll tip off following the girl’s game, tentatively at 7:30 pm.

With a great stretch of meets behind them, the girl’s cheer squad has another SVL opponent on their radar this weekend. They’ll be heading to Lapeer High over the weekend, competing in an invite with the time TBA.

The wrestlers will be back at it, heading to Lapeer for individual districts with that time TBA.

The boy’s bowling squad is looking to defend their SVL crown yet again, competing in the SVL finals at Monitor Lanes. They’ll be hitting the lanes at 1 pm.

It’s back-to-back gamedays for the boy’s basketball squad, making a road trip out to Pontiac for a 1:30 tipoff with Notre Dame Prep.

To round out the week, the hockey squad is capping off their 3 game week at Hartland Arena, taking on Fenton at 6 pm.

Good luck to all the squads heading out to compete!

DAVISON (DTV) – (2/8/2022) – On Friday, February 10th, Davison cardinal athletes will be signing their national letters of intent to play their sports at the collegiate level. The ceremony will be at 5:00 p.m. in the cafeteria.

Congratulations to everyone signing and good luck competing at the next level!

DAVISON (DTV) – (2/1/2022) – Different sports teams are already hitting the gym in preparation for the spring season!

The Softball girls are up early and practicing every week from Tuesday to Thursday. They start at 5:30 a.m. and end before school. They also have hitting, pitching, and catching sessions in the gym each week. Go to their twitter to stay up to date on Davison softball.

The Baseball guys are also hosting open gym workouts and conditioning until March 3rd. They’re on Mondays from 7-9 p.m. and Thursdays from 3-5 p.m. at the indoor dome on Irish road.

And the last team to have sports workouts are the Lacross teams. Their first session will be on February 10th at 7:30 p.m. in the DHS gym. Contact Jessica Schmitt or Isaac Norton for more information on these off-season workouts!

DAVISON (DTV) – 1/24/22 – With Monday athletics canceled due to weather, the rest of the week is still packed to the brim with Davison athletes heading out to compete.

Boys swim will get things going tomorrow evening with a 6 pm meet, heading to Swartz Creek to take on the Dragons and the Flushing Raiders.

The boys and girls bowling squads will be at Grand Blanc Lanes at the same time, taking on Saginaw Heritage.

Wednesday will get going with a big-time meet for the wrestling team, heading into arch-enemy territory for a tri-meet with Detroit Catholic Central and Holt. They’ll hit the mats at 6 pm.

Hockey faces off with Lapeer High at the same time, heading to Crystal Fieldhouse for that game.

Basketball’s first home doubleheader of the season will get going at 6 pm, with the girls taking on Lapeer High. The guys will follow at 7:30 for a big-time rivalry night. DTV will be broadcasting both these games, will guest announcer and football coach Jake Weingartz making another appearance for the guys game!

Boys varsity swim will be over at Grand Blanc high at 6 pm for a meet with the Bobcats as well.

Davison athletes are working overtime this weekend, making for an exciting Saturday of sports.

The varsity cheer squad will be heading to Grand Blanc High for the Bobcats invite, with the time TBA.

The wrestling squad will be right back at it after their Wednesday meet, heading to Bay City Central for an SVL tourney, with the time also TBA.

Both bowling squads will be heading to Gerlach’s Lanes bright and early at 10 am, with the guys playing Saginaw High and the girls taking on the host Bay City Central. Then they’ll both be back at Rollaway at 2 pm, with the opponents flipping.

Hockey will round out the afternoon with a 3pm faceoff at Dort Federal Event Center against Swan Valley.

Good luck to all the teams and athletes competing this week!

DAVISON (DTV) – (1/20/2022) – The Davison High School pompon team is hosting a youth clinic on February 17th. Anyone in pre-k to 6th grade can participate.
To register for the clinic, there is a $30 fee, and the registration form must be completed by Jan. 21st. The money is for a t-shirt, performance, and pompons; the payment may be paid on eFunds under the “Varsity Pom Youth Clinic” or by sending a check to the high school athletic office made out to Davison Community Schools.