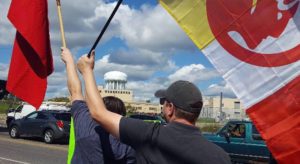 The people of Flint have been without drinkable water for 2 years, 5 months, and 12 days.

In recent discoveries, the water crisis is beginning to effect the people who are scared to use the lead infested water and who refuse to bath in it. The outbreak of the infectious bacterial disease Shigellosis came shortly after the outbreak of Legionnaires, which the surrounding area saw the worst cases in disease history. The people are still scared of the water, as they rightfully should be, so they stopped washing their hands and they stopped bathing. The use of baby wipes are not effective in killing bacteria and they do not replace the need to wash your hands. CNN has reports that Genesse County has the most cases of Shigellosis in the state.  There have been 84 cases so far this year and at least 53 of them are in Flint. 27 people have been hospitalized.  The spike of this disease started in June 2016, peaking about 5 times the number of cases since 2011.

The Federal government has not forgotten about Flint, as the Senate fought to get money for Flint, the house only agreed on 170 million that Flint will receive in 2017. The Democrats threatened that if the Republicans did not agree, they would shut down the government that Friday. Luckily an agreement was made and Flint will be receiving relief  soon.

Presidential Candidate Donald Trump came to Flint recently and did not receive the warmest welcome, he began speaking about his platform when he got off topic. “Mr. Trump, I invited you here to thank us for what we’ve done in Flint, not give a political speech,” Rev. Faith Green Timmons of the Bethel United Methodist Church made sure that Trump was here for a reason, to address the crisis, and that’s exactly what he did after that.